A word from the owner.

Welcome on behalf of the family Roubos. We hope you will enjoy a pleasant stay at our arable farm. We are very pleased you selected our park for your stay. Should you have any questions or remarks, please feel free to contact us. In case you are interested, you can read a bit more about the area and the farm below.

We wish you a very pleasant stay!

You will be staying in the Haarlemmermeer polder. 160 years ago this area used to be a large inland lake. Actually, you are standing on the bottom of an old lake, 6 metres below sea level. The ground is still filled with shells. The Haarlemmermeer used to be called: “The water wolf”. It used to be a large lake, consisting of several ponds which had grown together. During storms and floods it guzzled large pieces of land, destroying complete villages. In 1840 the Haarlemmermeer had a total surface of 18.000 hectares. In case of storms and floods the water reached the gates of Leiden and Amsterdam. Already at the beginning of the 17th century plans had been made to impolder the Haarlemmermeer. These plans were finally realized in 1852: During three years and three months three steam-driven pumping stations pumped water into the hand-dug canal around the Haarlemmermeer, we call it the Ringvaart. They pumped until they reached the bottom of the Haarlemmermeer. The entire new polder was developed for modern, largescale agriculture. All parcels have a length of 1000 metres and a width of 200 metres. The polder was sold per parcel of 20 hectares.

The new land fell into the hands of large landowners. Tenants and farmers, often the same workers who had dug the Ringvaart and the Ringdijk, had a hard time on the heavy, moist soil. After 1900 things improved: agricultural prices increased and more farmers became owner of their land. Agricultural workers settled along the Ringvaart, attracted by well-paid seasonal work.

The family Roubos originally comes from West-Brabant and was also attracted by the new, fertile polder land. Jasper’s great-grandfather ended up as tenant of a farm, owned by a landlord. From 1945 the Haarlemmermeer underwent tempestuous times. Industrial zones shot up like mushrooms, roads were constructed and the importance of agriculture reduced. The enormous growth of Schiphol definitely influenced the Haarlemmermeer. In 2003 the airport covered 15% of the area and became the largest employer in the region. The convenient location to Schiphol airport and Randstad had positive consequences: Townsmen looking for peace and space discovered the area from the 70-es. Besides, international companies increasingly settled here. In this way, a divers municipality grew, consisting of modern offices and high-quality industry on the one hand and old traditional Dutch farmhouses (in the shape of a cheese-cover) in a characteristic North Holland polder landscape on the other hand.

We kindly welcome you to our arable farm which has existed for 160 years now. The current farm was built in 2002. The original farm founded by our family after the impoldering is situated at 1 km, at the Rijnlanderweg 1639. The construction of the high-speed train forced us to move to this new location. The arable farm has a total surface of 80 hectares. We grow potatoes for the fries industry, onions for a peel company where onions are cut into cubes or rings. These cubes mainly end up at the fish dealer. Besides, we grow wheat for the fodder plant and sugar beets for the sugar plant. We also rent land to a bulb grower from Lisse. You might observe his tulips and/or hyacinths on the parcels, around the farm. Besides, we also work for fellow farmers and our machines are used by the bulb grower.

In 2010 my wife and I started the motorhome park. It seemed like a great challenge; of course we love buzz and atmosphere! Our park is a perfect operating base for visiting cities. In spring you should definitely visit the bulb-growing area and the Keukenhof. Within a couple of minutes you can reach the Kagerplassen, a completely different area, characterized by meadows, mills and many pools; in short: a true authentic Dutch area. 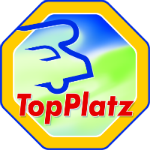